My Journey, My China Treatment Update — and Taking a Break Written By: ingridricks - Jan• 08•18 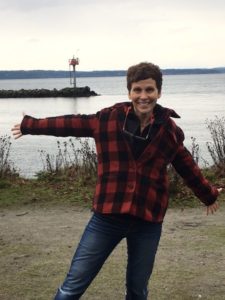 I’ve realized I need to start at the beginning. So here goes.

Until two years ago – twenty-five and a half months to be precise – I was sitting on top of the world. My eyesight was doing amazing. Thanks to acupuncture and diet/lifestyle changes, I was seeing better than ever in my peripheral vision, and my central acuity was holding strong.

Then, during a routine physical the day before Thanksgiving 2015, my doctor discovered a lump in my left breast. Two weeks later, I was diagnosed with highly aggressive triple-negative breast cancer. I was told I would need immediate surgery and aggressive chemotherapy to increase my survival odds by 20 percent.

When I first met with my oncologist, I raised concerns that the chemo could have a negative impact on my eyesight. He had never heard of RP and couldn’t find anything substantial to suggest that the drug Taxotere he wanted to give me would do lasting harm. Given the dire situation I was presented with and my very strong desire to live, I went for it.

My oncologist and I now know otherwise. Though apparently those in the know already knew. My new retinal specialist at the Casey Eye Institute in Portland says that Taxotere is one of the worst chemotherapy drugs for the retina – which makes it particularly bad when the retina is already compromised.

By the completion of my third chemotherapy cycle, my central acuity – which had held firm for three years straight – dropped from 20/30 to 20/70 and my light perception also plummeted. By the time I completed my fourth cycle, the blurriness and light perception was so bad I was having a hard time recognizing faces. I was supposed to go six rounds. But after the fourth round, my oncologist and I both concluded that if I continued, I would have no eyesight left. So, we rolled the dice and stopped two cycles short.

I continued to undergo periodic acupuncture treatment. Though I think it helped in maintaining the eyesight I have left, it didn’t have the same impact as it did pre-chemotherapy. I also continued to live in serious fear – waiting for the next shoe to drop. Along the way, I became a whole-foods vegan (aside from occasional salmon and a cheese splurge every couple months), quit sugar, started meditating and getting back to my life. I managed to hold my central acuity at 20/70, but the donut of blindness I’ve had around my central core for a long time began to encroach on my right eye.

As some of you know, I write books for a living (it’s also my passion), and on Friday, June 9th while interviewing a client for a book project, I noticed that my computer screen seemed distorted and that I was seeing double vision. It scared me. I knew I needed to do something or I would have no eyesight.

I had seen a post fellow RPer Brian Smith had written in the Determined to See Facebook group the previous fall about his positive experience with the surgery and stem cell implants in China, and reached out to him to find out how his eyes were doing nine months later. His report was positive. I also reached out to Carol Gu through the treatment Website restorerpvision.com. She wasn’t sure that she could help me, but I was impressed by her response and her honesty. She had me fill out a lengthy medical history form so she could review my case with the surgeons. I knew what was in store for me if I didn’t give it a try. But I didn’t see how it was possible.

My husband and I are both self-employed – which in the US means expensive health insurance with high deductibles. My cancer treatment spanned a two-year calendar period, and between our monthly premiums, the high deductibles, and the various out of pocket expenses that our insurance didn’t cover, we have accumulated a pile of medical bills that we are still paying off.

On Monday, June 12, I opened my computer and could no longer make out the letters on my screen because my vision was so distorted. I was in the middle of a chapter deadline for a client and spent the day going to computer stores with my husband looking for assistive technology to help me – all while trying to fight off panic attacks. That night, I sat at my kitchen table sobbing. I felt so alone and had reached my breaking point. Then my eighteen-year old daughter, Sydney, took charge. She took it upon herself to start a fundraiser to access the China surgeries and shared it with friends and strangers alike. Within two days – and thanks to some of you and your incredible kindness and generosity – we had the funding to go to China.

What I didn’t know until I arrived at the hospital in China was that Carol wasn’t sure about taking me on as a patient because of the advanced stage of my RP. But unbeknownst to me, Brian Smith, the amazing RPer I had reached out to, wrote her a lengthy email on my behalf, asking her to please do everything she could to help me.

It was like a team of angels – more than 140 in all – had stepped in to lift me up at the moment I hit bottom.

That’s how I landed in China. What I found was a very professional, skilled, caring medical staff who have been treating RP patients for twenty years (all Chinese RP patients until Carol stepped in and opened up the treatment to the international community).

Here’s what everyone needs to know about it:

1) it is NOT a cure. The focus is to increase blood flow and circulation and then incorporate embryotic stem cells that can help restore a little eyesight and, hopefully, stabilize vision.

2) The results are different for everyone. Because RP is an umbrella term for numerous eye diseases, it’s impossible to find a treatment that works across the board. What’s more, environmental factors such as diet, lifestyle, attitude and stress have a significant impact.

3) Like any other disease, the earlier the intervention, the better the results.

Fast forward five months. My eyesight continues to be a struggle but I’ve seen some noticeable improvements.

Light Perception/Colors. As mentioned, my light perception decreased considerably after the chemo and I need more light to see. My color perception also dimmed. After the China surgery and stemcell implant, I noticed a significant improvement in light perception and color contrast. The light perception has since dimmed. Though my colors continue to stay brighter. I can see vivid colors (in the right light), and white is so bright it almost comes at me like a bright flash light.

A month ago, I went to my two-year oncology appointment – a major milestone for triple negative breast cancer. For the first time in two years, I wasn’t terrified. I knew I was going to be okay. And I am.

I decided to leave health issues and fear behind me and start 2018 as a healthy, whole person. And to make my health – physical and mental – a priority.

That’s where I’m at right now. I can work on my computer, though I have to patch my right eye to do it because the vision in that eye is currently too restricted to function in conjunction with my left eye. I’ve been told to avoid screen time but my work requires it. So, I’m avoiding all other screen time (this blog and Facebook), as much as possible.

I‘m as Determined as EVER to SEE and I continue to search out ways I can improve my eyesight. Recently, I had a phone consultation with Meir Schneider, a man who reversed his blindness (not from RP), using breathing, cupping, movements, and various eye/brain exercises. He now runs a self-healing center in California. Following his guidance, I’ve been doing daily deep breathing and cupping and it’s definitely helping with blood flow and circulation.

I’ve also been meditating a lot and focusing on energy and mind/body connections. What I know for certain is that positive energy is key, and that it’s up to us to take charge of our health – and to keep taking action.

I’ve been writing this blog for nearly five years now and need to take a break. I think my fellow blogger, Jeanne Aufmuth feels the same. But if you want to stay connected, please join the Determined to See Facebook group. Fellow RPer and rock star Yvette Fox has offered to take over the role of admin.

I wish you all a happy, healthy wonderful 2018. Thank you for joining me on this journey – and for all the love and support you’ve provided over the years. What I’ve learned above all is that we are stronger together than alone.