Inspirational Story of a Young Woman with Retinitis Pigmentosa 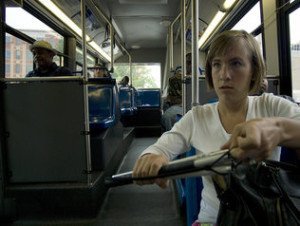 Elizabeth Troutman is 25 and going blind.

She can’t see the sun rise or the stars at night. She hopes to have children one day, but will never know their smiles or their frowns.

She rides the city bus uptown to work in the mornings, a pretty woman in high heels, with nothing to show she’s almost blind until she steps off the bus and opens a collapsible white cane with a red tip. She tap-taps the pavement, ears alert to approaching cars, feet intuitively following the curve of the sidewalk, then through the glass door and up the elevator to her office. There, a computer reads aloud the words on her screen.

You might expect someone with a progressive disability like hers to be overcome with depression or anger, and some people are. Not Elizabeth. She has faced this future for 20 years, gradually losing eyesight the older she got until all that’s left is a tiny keyhole of sight in her right eye.

Though she became legally blind in high school, she lived in Paris for a semester during college and graduated with honors from Princeton, where some classmates thought at first she drank a lot because of the way she stumbled around campus at night. She now plans to go to law school.

There are, Elizabeth believes, much worse misfortunes than not seeing. In her job as assistant director for development at the Council for Children’s Rights, she meets boys and girls who have been sexually abused, who struggle with autism, whose parents neglect them.

Elizabeth would rather be blind.

Still. If she could see.

Elizabeth – Lizzie to friends – was 5 when her parents found out.

At her annual doctor’s visit, she failed the eye exam. Her parents, Liz and Haynes Lea, weren’t alarmed. Haynes wore glasses and they suspected Elizabeth might need glasses, too. At an Easter egg hunt she ran right past eggs her 2-year-old sister spotted.

They took her to a pediatric ophthalmologist, an appointment that changed their lives so dramatically they remember the date: April 6, 1989.

As parents, we envision endless possibilities for our children, who we hope they become, what they might achieve, the adventures they’ll have along the way. Perhaps unfairly, we project our own expectations on them.

The doctor’s diagnosis was beyond anything Haynes and Liz ever imagined. Or had ever heard about.

Elizabeth, they learned, has a disease called retinitis pigmentosa. It was destroying the retina on the back inside walls of her eyes, where images are captured. She would gradually lose her ability to see.

There was no way to predict how far her eyesight would deteriorate. No way to stop the progression. No cure.

That night, Haynes retreated to the basement of their house so Elizabeth wouldn’t see him cry. He felt weighted down by incredible sadness. And fear. What, he wondered, would become of Elizabeth’s life?

Elizabeth, the oldest of three girls, was too young to understand.

Not long after she was diagnosed, Elizabeth was playing in her bedroom, stringing a necklace of beads. It took her much longer than it would have taken another child, as she struggled to thread the tiny string through the tiny holes. Finally, she added the last bead. She was so proud, she held up the necklace for her mother to see. That’s beautiful! Just then all the beads scattered across the floor. Elizabeth had forgotten to knot the end of the string.

Her mother teared up.