As some of you know, and even helped make possible (thank you so much), I’ve spent the last fifteen days in China—undergoing vascular shunt surgeries and stem cell implantation. I made the decision after hearing positive feedback from fellow RPers Brian Smith and Jodi Parr—who underwent the surgeries nearly a year ago—and extensive communication with Carol Gu, the coordinator and visionary behind the China RP International Treatment program. Acupuncture had held my eyesight steady for several years. But my eyesight took a big hit during the aggressive chemotherapy I underwent last year, and I knew I needed to do something before it was too late. The principals behind the surgeries made a lot of sense to me. The vascular shunt surgeries help increase blood flow and circulation to the retina, which I know is severely lacking in RP patients and the whole focus of the acupuncture I have been receiving for the past four years. And the stem cell surgery both stimulates dormant cells and grows new blood vessels that are critical for healthy visual function. I’ve been actively pursuing stem cell treatments for five years now, most recently in California—where in April I qualified for the second phase of their stem cell trial, and have heard nothing since. The first step was filling out an extensive patient evaluation form to ensure I qualified for the surgeries. From there, I had lengthy conversations with Carol to ensure their safety and efficacy. Once I was convinced that there was no downside, I decided to go for it.

Though hopeful, I wasn’t sure what to expect. What I found has been so remarkable from my perspective that I feel the backstory deserves a blog post of its own, which I will share with all of you next week. But here, in a nutshell, is my treatment experience.

Day 1: My daughter, Sydney and I landed at the Longjia International Airport at 3:30 in the morning, Tuesday July 25th. We were exhausted after a long delay in Shanghai and were thrilled to be warmly greeted by the English-speaking coordinators, Carol Gu and Patrick Lee. They drove us to the treatment center—approximately a half an hour from the airport—and got us situated in a nicely furnished Western-style suite within the center. As soon as we arrived, we were met by a nurse who performed blood work and urine testing. 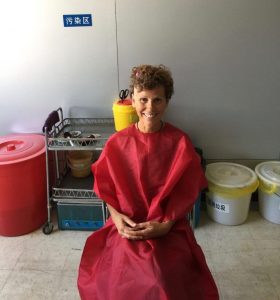 Afterward we slept for several hours. Later that day I underwent a series of tests to determine my suitability for the vascular shunt surgeries and stem cell implantation. These tests included an FERG to measure retinal function, a visual field test, a visual acuity test, an Intro Ocular Pressure test, a PVEP test to measure optic nerve function, and an eye ultra sound to determine if my eye structure was suitable for the stem cell implantation. The rest of the day was spent resting and getting over jetlag.

Day 2: After taking my blood pressure and temperature, I underwent preparation for my first vascular shunt surgery. This involved a trip to the hospital barber to have the right side of my head shaved, about two inches above my ear. Then it was time for the surgery. Done under local anesthesia, this procedure involved a small incision directly above the ear to block one of many arteries to my head. This, in turn, increased blood flow to the optic artery. This surgery took approximately ten minutes. Later that day, I was started on IV infusions containing a blend of Chinese herbs to promote blood flow and circulation throughout my body.

Day 3: This was largely a recovery day, though I received another IV infusion. I was also started on the first of fourteen eye injections safely inserted through ocular tissue. These injections also contain Chinese herbs designed to increase blood flow and circulation to the retina. In addition, they started me on oral Chinese herb medication—again to promote blood flow and circulation.

Day 4: I received the second shunt surgery on the left side of my head, along with the IV infusion, eye injections and oral medication.

Days 5 and 6: These were primarily recovery days with the IV infusions, eye injections and oral medications. On Day 6, Carol and Patrick took Sydney, me and the two other international RP patients to a beautiful lake and park constructed during Japanese colonial times. It included a Buddhist temple, which was amazing. 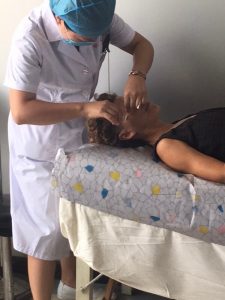 Day 7: Stem cell day! This is the day I have been waiting for. Preparation for the surgery involved clearing my tear ducts, in which a needle is inserted into the tear duct followed by a saline solution wash. Afterwards, the nurses performed a comprehensive eyewash in both of my eyes. Neither of these procedures were particularly pleasant, but they were manageable. Then it was time for the surgery, again performed under local anesthesia. A tiny cut was made at the inside corner of each eye where millions of MSC stem cells were implanted into the back of my retinas. The entire procedure for both eyes took about ten minutes. Once done, my eyes were completely bandaged for 24 hours. An important thing to note about this day: my visual acuity increased by one line in my left eye and two lines in my right eye in a visual acuity test conducted an hour before my stem cell surgery. This improvement is a result of the vascular shunt surgeries. 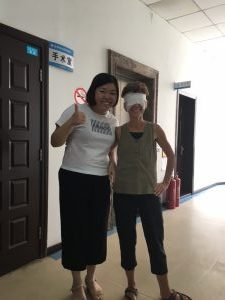 Day 8: After 24 hours in total darkness, my bandages were removed. I can’t tell you how much I hated not being able to see anything, and how much it reiterated the importance of doing everything in my power to save my eyesight. My eyes, though blurry and sore, seem to have adjusted well to the stem cells. In the first 24 hour period, I had no adverse reaction. Along with the regular IV infusion, eye injections and oral medication, they started me on antibiotic eye drops to protect against infection.

Days 9 through 12: These days were largely recovery days. I was forced to stay in our room the entire time aside from my trips to the patient room for my eye injections. Though my eyes made a great recovery, they remained blurry and sore until Day 12, when they finally started feeling normal again.

Day 13: Released from house arrest! The doctor finally cleared me to go outside, which felt amazing. We celebrated by going to dinner at a Japanese restaurant with patient coordinators, Carol and Patrick. 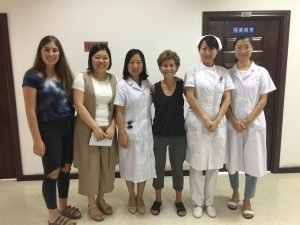 Day 14: I once again underwent comprehensive eye testing to determine what, if any, eye improvements I experienced. Though I won’t see the full impact of the stem cells for three to six months, I am thrilled to report that I’ve already had visual improvement all the way around. Most promising are the results that measure visual function, which tests the connection between the optic nerve and the brain. It nearly tripled. Not only does this mean that the stem cells should do very well in these upcoming months, but I already have an easier time adjusting to different lighting. For example, today we went to a Confucius temple where it was really bright outside and extremely dim inside. After about a minute, my eyes were able to adjust. While I couldn’t see everything in the room, I was able to see a lot. This is something I haven’t been able to do for years, at least since the chemotherapy.

Clarification: Based on some of the questions I’ve been receiving, I realize I ned to make this more clear.  I STILL have RP and my vision is still quite limited. The surgeries aren’t a cure by any stretch. They are a treatment designed to restore some vision (greatly varies depending on the patient and the type and progession of their disease) and halt or greatly slow the progression of the disease.  According to Carol, about 30 percent of patients experience some immediate improvement while at the hospital undergoing treatment, and approximately 80 percent of patients experience improvement during the following three to six months – as the stems cells kick in. In my case, my visual acuity increased by two line – going from 20/70 to 20/50 and my light perception in my peripheral vision improved a little.  Light sensitivity is the biggest issue for me at this point. I now need a lot more light to see clearly and when I go from a well-lit area to a more dimly lit area, my eyes struggle to adjust…if they adjust at all.  But now – post surgeries, my light sensitivity is beginning to increase and my eyes are starting to adjust a little when I go into a dimly lit room. And I’m hopeful this will continue to improve as the stem cells begin to take hold in the next few months – which is where the boost in my visual function comes into play.


Day 15: This morning we head back to Seattle. I can’t express enough how thankful I am to have had the opportunity to access these surgeries and treatments. The staff was incredibly kind and experienced. It was amazing to be in the care of doctors and nurses who know so much about Retinitis Pigmentosa and have so much experience treating RP patients. Again, I will post the backstory behind the treatment center and the mission and goals of the staff next week. And I will keep all of you updated on my progress with the stem cells over the coming months. If you would like more information on the surgeries/treatments, visit: restorerpvision.com